It was during the inaugural year of the Light 2 Light 50 Mile Run in February that I decided I wanted to run the OBX 200. It would be my first attempt at a multiday event and I thought what better course then along the entire Outer Banks of NC and finishing in Emerald Isle. When I'm signing up for a race I haven't done before there are a few things that it must include. The course must be beautiful, prefer trails but if it's going to be on the road it better be some good scenery. The chance for a DNF must be a real possibility. Some may think this is a weird thing to look for in an event but I always like to see what my limits are. What fun is always doing the easy stuff? Finally, there must be a little fear in signing up for it. As in, "what the hell am I doing, this sounds insane!" The OBX 200 met all three and here I go logging on to Ultrasignup to get this party started!

It was around mid February when I signed up for this race, exactly 8 weeks from race day to be exact. So this may or may not have been my first mistake but most of the time in these ultra events it comes down to having  a good state of mind when things go to crap along with a good running base leading up to the events. I felt I would be ok and a good buddy of mine, Jeff Bell, convinced me that we could handle it. I put in a somewhat half assed training plan with an average of 30-40 mile weeks, a few shorter than that maybe one or two more than that but overall felt I did enough to be ready as I could in the short time that I had.

Left work on Friday afternoon and headed to the OBX of NC. Originally had some plans to stay with Jeff in a house they were renting from some friends but some things were out of our control and we ended up staying in The Sanderling Inn, thanks to Wendy for getting us a last minute deal! Met Shawn, Rachel, Wendy, and race director extraordinaire, Henry Lupton for a debugging dinner at a local pizza place in Southern Shores. Advice was shared, last minute course directions and checkpoints were finalized, and then Henry said "I have the buckle if anyone wants to see it" Mistake number two...I said "hell yeah, let me see that thing." Everyone backed away when Henry handed me the box and went out of their way not to see the buckle. Hint..Hint..(never look at the actual buckle before the race.) 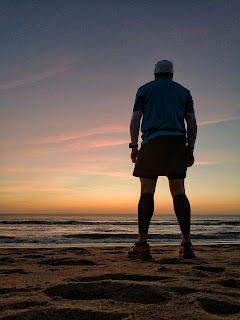 ﻿﻿
﻿﻿Race morning is finally here and we are standing at the horse grate in Corolla while Jeff sings the National Anthem. It's tradition that if Jeff is in an ultra taking place on the OBX, he is also singing the National Anthem. We are off! The first 22 miles are on the beach, 11 out to the VA border and then back to Corolla. High tide was still in but on its way out so most of the running to the VA line wasn't too bad except for a few sections where we were in pretty deep sand and not really moving too well. Got to checkpoint 1 which was the fence at the state line in about 2:30 well above our planned time but Jeff, Shawn, and I were feeling pretty good. We started off on a 3/2 minute run/walk ratio and held that for most of the way there and back to the road. Rachel and Wendy took off and we never saw them again except for when we met them on the return back from the line. Going out wasn't too bad but on the way back the sun was up and it was starting to get hot. I had gone through just about both of my water bottles and was starting to wonder how was I going to get the through the net 8 miles with no water. Thanks to some veteran skills from Jeff, he showed Shawn and I how to get water from people on the beach without necessarily asking for water from people on the beach. Crisis averted and I think we got back off the beach in about 3hrs on return trip so it was 12pm or so when we got back to the road. Luckily we left a change of shoes and socks in the bushes for when we got off the beach because the amount of sand was exactly what you would expect. Changed shoes and took about a 20 minute break under a car port of a beach house not being rented.

﻿﻿Finally, we were now heading in the right direction and it was all road from here on out! A stop at a pizza place about a mile or so when we got off the beach turned into a much longer stop than planned but we were in no hurry and figured we had 4 days of this stuff so might as well take our time. Our 3/2 run walk had diminished to just a walk but we were holding steady at about 16 1/2 minute miles walking so no worries. Jeff left his pack at the Sanderling so that was our next stopping point. The Sanderling is about 13 miles from coming off the beach and it seemed like it took forever to get to that point. We picked up Jeff's pack and spent quite a bit of time here, maybe an hour. Our stops were long but we all felt they were needed, however; it was taking a long time to get off this section of the OBX and our original plans of where we were going to stop for the night were kind of going out the window. Kept trucking along and finally made it to BP station at Southern Shores around 930pm or so. Much later than had planned but checkpoint 2 (Mile 44) was now complete. The pizza from mid day had worn off and I knew this was probably last chance for food for the night due to the season and time of night it was. I got a large Mt. Dew, Pringles, and Vienna Sausages. Hey, it's a BP my options were limited. Henry was here at checkpoint 2 so we sat and chatted with him while I ate my "last supper" and another good friend from Greenville, Jenny Wilson and here BIL Wayne were in twon for the Flying Pirate so they stopped by to see us as well. 10pm Saturday night, these were the last calories I would have for the rest of the race minus a road angel cooler the following day around lunch time. Mistake #3 and this turned out to be a big one!

We trekked on into the night down the beach road passing through Kill Devil Hills, Kitty Hawk and finally arriving in Nags Head. Our plan was to crash at Jeanettes Pier, somewhere out of the wind but there weren't any spots to be had. Went down a little ways to the Comfort Inn and asked the lady at the desk for a room just to lay down in on the floor. She first offered the lobby floor which we graciously took but then offered us her van. I know, it sounds really weird but after about 18hrs of moving and dead tired we were not picky. We were there for about 3hrs but I feel like I slept maybe only an hour and a half. Before I knew it phone alarm was going off and it was 630. We were up and out of the van, used the restroom before leaving and was heading on towards HWY 12. Mistake #4...Still to this day I don't know why it didn't occur to Jeff, Shawn, or myself to stop at the 7/11 literally across the street and load up on food, drink, or calories but it never crossed our mind. Now keep in mind, the last time I ate was 10pm the night before and it wasn't exactly a 3 course meal. As we headed down HWY 12 the wind was at about 25-30 mph headwind and nothing but sand right at us. It was a death march down HWY 12 to Coquina Beach. Lack of sleep, calories and the conditions were starting to take their toll on me...more than the others I believe. I was beginning to wonder when I would be able to get some calories from either food or drink. All I had was 2 water bottles and those were going fast and we still had about maybe 15-20 miles until we get to Rodanthe. This was not looking good at all. Then we get to the Bonner Bridge and there was a cooler that said "OBX 200 Runners" filled with Gatorade and a few candy bars. It didn't last long and I was very happy to see this. You can let fear control your life or you can run right through it. Before signing up for this race I almost didn't sign up because of this one bridge crossing by foot that we had to do, Bonner Bridge is about a 3 mile long high rise bridge with little to no shoulder, narrow lanes, and we were crossing it at about the busiest time we could be crossing it. We started on the bridge and halfway up I realized it wasn't as bad as I was thinking it would be. Most of the drivers were very courteous and gave us some room (maybe it was because I was half way into their lane and nowhere near that railing). To hell with the view that Jeff and Shawn were saying they had as they leaned over the railing looking out into the ocean!

What Worked
What Didn't Work
Well this race report has gone on longer then my actual race did but I hope it helps someone who is thinking about attempting one of these adventures. I cannot recommend OBX 200 enough. You will be hard pressed to find a more beautiful course to run on and a race director like Henry who will do everything he can to give you the most wonderful miserable experience of your life. No mile is a bad mile and some of our biggest learning experiences come more from events that go bad as opposed to events that go right, it was for me anyway. Never be afraid to step out of your comfort zone, all the growth happens there! 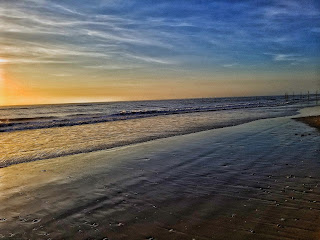 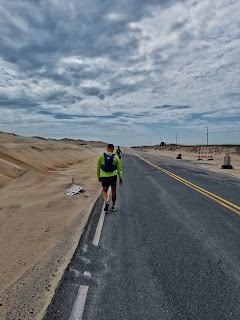 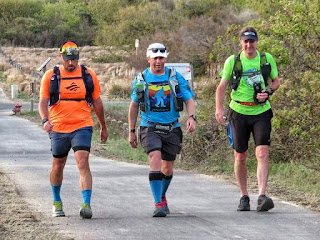 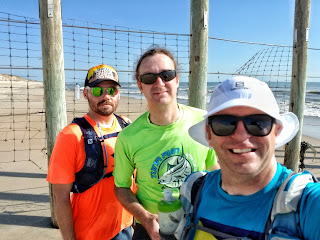