I've decided that I wanted to test the waters of the Ultra distances about 6 months ago and through some encouragement of my running and endurance junkie friends Uwharrie kept coming up. It had all the ingredients that I liked...trail, challenging, great atmosphere, mountains so I figured I would enter the lottery and chances are I probably wouldn't get picked and can really train for it for a year before doing it next year. I've entered two lotteries in my life NYC Marathon in 2012 and Uwharrie, just my luck I was in for the 40 miles this year.

Through some good months of training race week was finally here. I was excited and nervous at the same time. Both Bert and Dave warned me about Uwharrie and described Uwharrie as tougher than an Ironman. I thought no way could that be true...more on that later! We headed up the night before, it was four of us from the Greenville area, Tony Parker, Scott Barker, Parker Ledbetter, and myself. Tony and I did the 40 and Parker and Scott were signed up for the 20. They were the smart ones! Made it up to Asheboro and picked up the packets with our race info and went and grabbed dinner, enjoyed the moment with a couple beers and were headed back to the room for an early wake up call.

Off to the Eldorado Outpost where we would get on a shuttle that would take us to the start. Erica was with me and was volunteering so I would see her at the mile 20 turn around. We got off the shuttle and lined up in the road waiting for the start. It just got real!!! 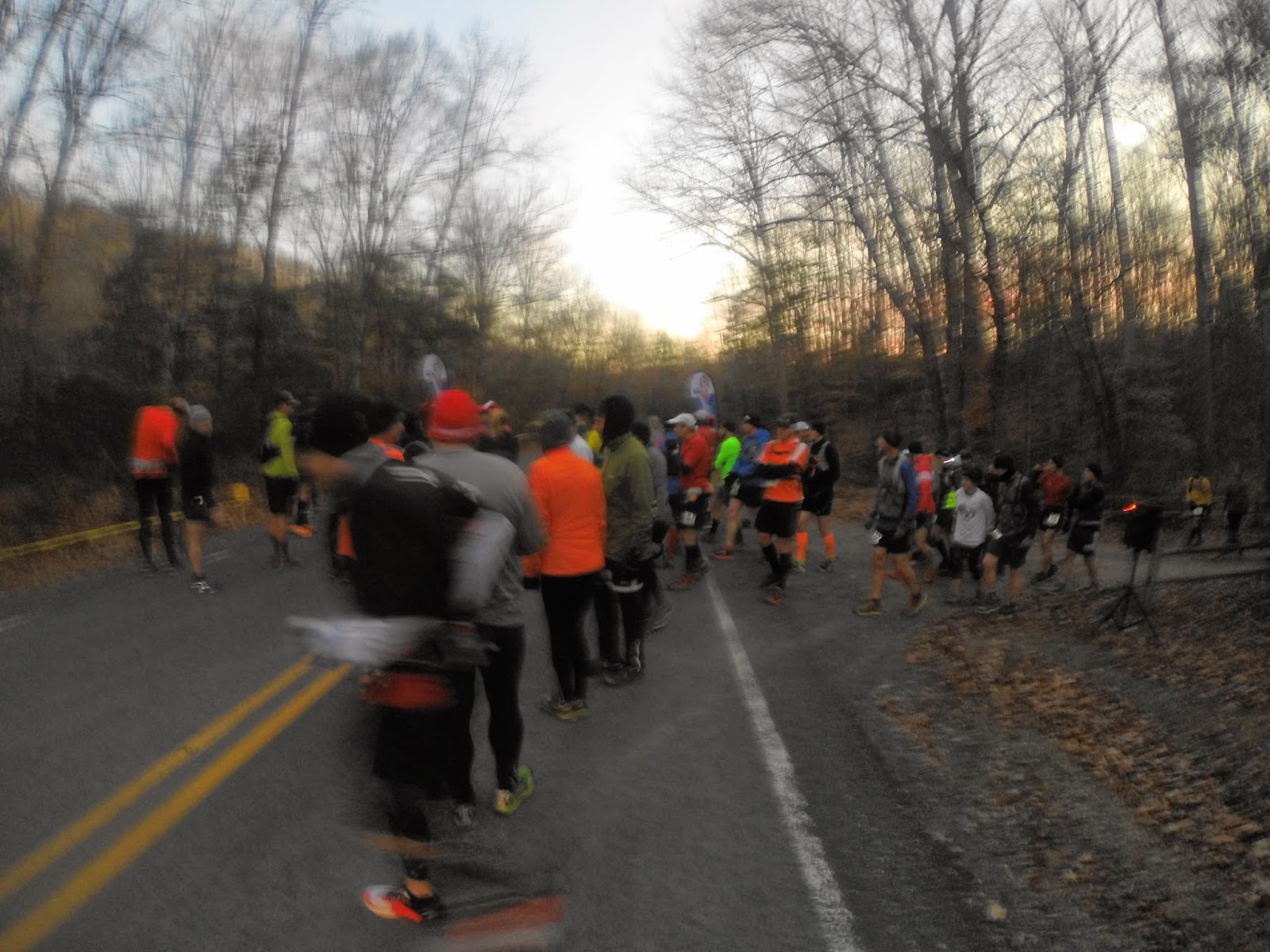 Start of the 40 Miler...This 200yds of pavement was the only easy part of the race!
I had a general plan of about 14-15 min/mile pace to start off not knowing anything about this race. I thought that would be fairly conservative and get me to the finish in plenty of time in my first Ultra Trail distance race. After about 200 yds from the start and we made an immediate right into the woods and on the trail that plan was thrown out the window! 1st mile was a 19:00min pace and I knew right then it was going to be tough! The roots, rocks, elevation change and climbs were relentless! I think I was averaging around 15-17min pace miles and started thinking finishing this thing in the 12 1/2 Hr time limit may be tougher than I thought.
As far as the beauty of the course and area it was amazing! We happened to be cresting the first major climb as the sun was coming up over the horizon. It is why I've fallen in  love with trail running! 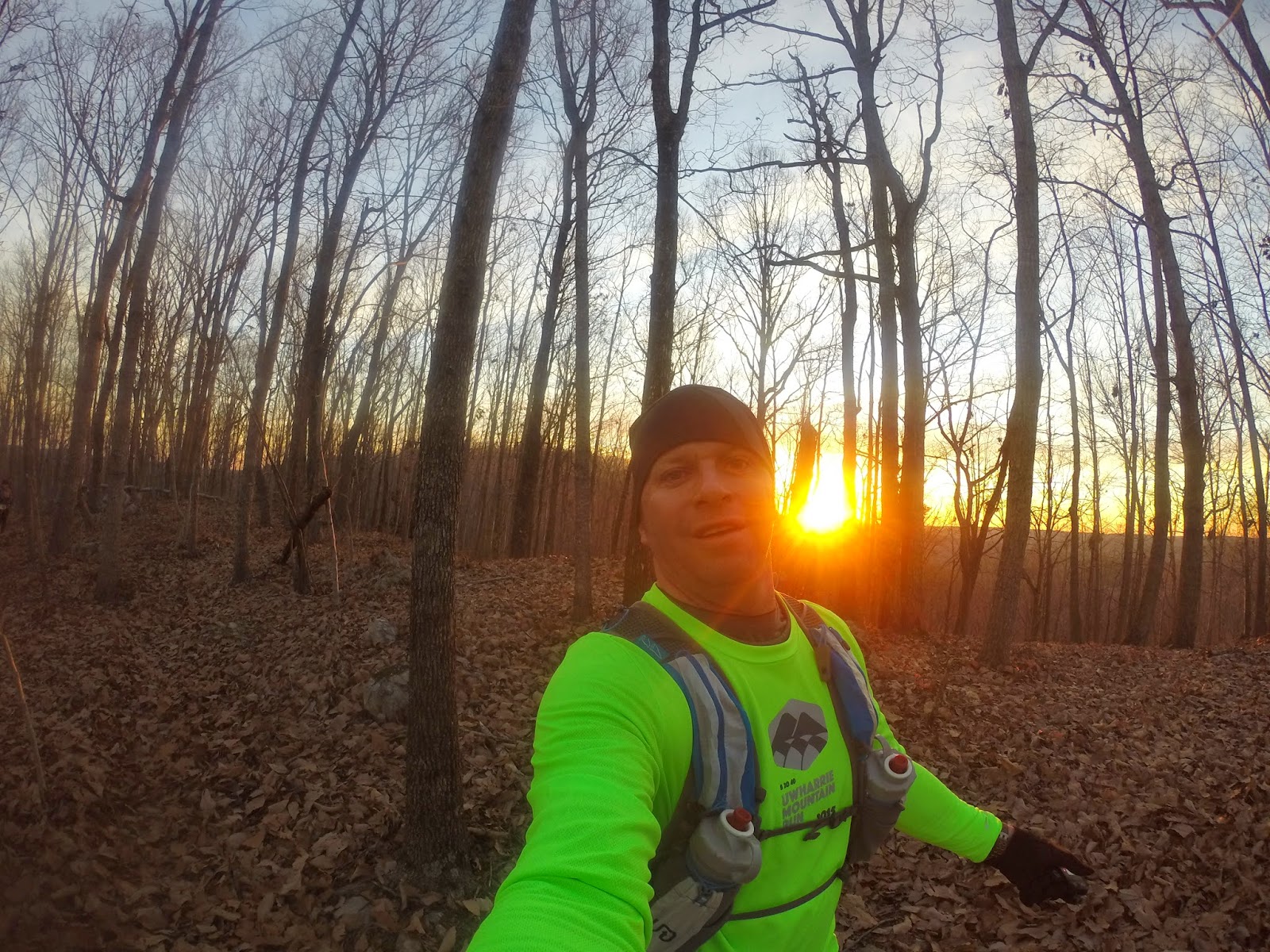 My fuel strategy was working great. I've switched to a new product called Tailwind. It takes all the guess work out of nutrition in endurance events. Just a drink mix and that's all you need! No gu's, gells, bars or anything! It works great and backs up their claim. I used that for the entire run and no issues at all! I had baggies of portioned out Tailwind and every aid station which was about 3-5 miles I would dump one into each bottle I carried for the run. I did have a few chocolate chip cookies at the end but other than that, that was it. Here is the link to this product if any of you would like to look into it. tailwindnutrition.com Slowly but surely the miles went by until I realized how slow I was really going when the two leaders were coming back from the turnaround and met me at mile 14! Not sure how it is possible to run a trail like this but they had to be part billy goat because they were flying! I kept trekking along and was nearing mile 18 the last aid station before the halfway! Excited but also knew I was nowhere close to being done.
Tony Parker who was running the 40 with me had a nasty fall on a creek crossing on a log around mile 12. His perseverance and determination was relentless. He could have easily called it quits then but kept on we were staying together for the first half. I finally made it to the halfway turnaround in 5:29:15 with a blistering pace of 16:28/mile. I was so glad to see Erica and so glad to stop for a second and catch my breath. She asked how I was doing and said "I hope you don't feel as bad as you look." I said "I don't, I feel worse!" I seriously thought I was going to earn my first DNF due to the cutoff times. 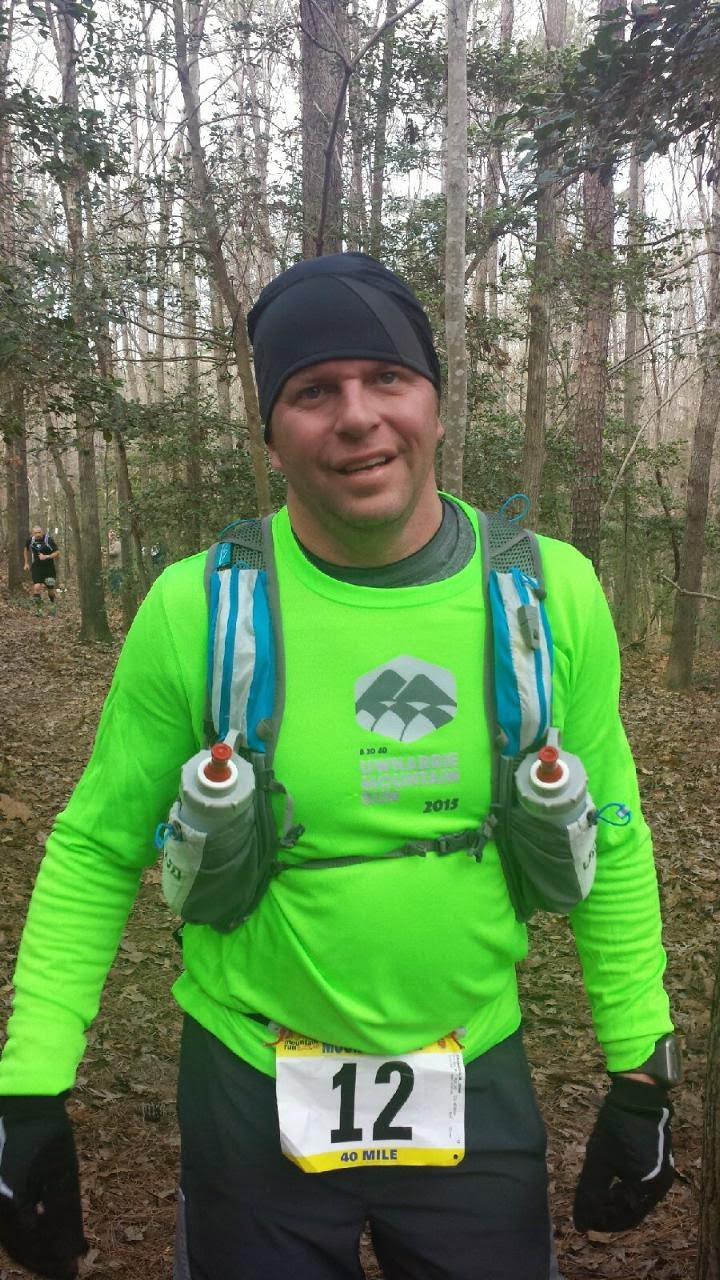 Mile 20-Half Way!!
I waited about 10 min in the aid station for Tony to come in and happened to see Parker finish his 20 Mile run. I was envious of him being done and wished I could relax but I knew I had work to do in order to finish in time. I started off and told Tony that we will have to try and pick it up a bit if we were to finish. How he even came back out after 20 and the condition his knee was in was beyond me. I don't think I would have continued but he pushed on to the aid station at 23. I did see Scott about 1 mile and a half before the his finish and he was pushing through some injuries himself. Amazing effort from him and Parker on their finishes! At the 23 mile aid station Tony asked me for his headlamp and told me to carry on without him. I tried to pick the pace a little, when I say pick up the pace,I mean from 17:00/mile to 15:00/mile and tried to catch back up with a group of guys I had run the better half of the first part of the race with. They were a 78 year old man named Dan Pieroni and his nephew Stephen Pieroni. Dan Pieroni reminded me so much of Dr. Bob and my grandfather. This man was truly an inspiration. It was his 18th year in a row doing this run, he had just ran 100k here at Uwharrie a few weeks ago and never stopped for one second! His nephew always crews for him on this race as far as carrying his bottles and nutrition and fills them every aid station while Dan just cruises on by. The conversation I had with them, especially with Dan are what made this experience so memorable. It felt like I was having a conversation with my grandfather all over again. I'd give anything to have those again!
It was going on mile 32 when I still had not seen them yet. I came into the aid station at mile 32 and Parker, Scott, and Erica were there as well as Clay Vick and his wife Sherry. It was so good to hear their support and see them. I asked how far Dan and Stephen were ahead of me and they said not far. I refueled and was off. I was starting to get a little worried knowing I was going to finish this thing in the dark and was really concerned about getting lost. Trail was marked but pretty tough to follow at times and I had no clue how I was going to manage this thing in the dark with just a headlamp. My worries went away coming at about mile 34 when I finally caught up to Dan and Stephen. I expressed to them how happy I was to catch back up because I really was beginning to think getting lost or a DNF was in my future. Dan assured me that neither of those were going to happen on to me on his watch! Such a wonderful and inspiring human being he was. We plugged on through 35 where we saw everyone again at the aid station. Are cut off time to 38 was getting close so we had no time to stop. They pull you at 38 if you are not there by 7pm. Mile 35 they had not seen Tony in quite some time so they sent two volunteers to look for him. I learned later this is where they pulled him. Nothing to be ashamed of at all! 35 at Uwharrie and the last 22 when you're injured is a huge accomplishment! He'll be back next year to tame this beast! Dan, Stephen, and I made it to 38 with just a few minutes to spare. With one more nasty hill to go we were just about there. Halfway up this brutal climb I was completely spent and stopped for a second to catch my breath! Dan with his relentless, forward, progress comes by me and says "we don't have time to stop or we will get a DNF, keep moving!" Loved it!!! Here is a man 40yrs older than me kicking my ass!!! We ascended the last hill and could see and here the crowd at the finish line! I was so elated and relieved that this experience was just about over. As we approached the finish line Dan and Stephen pulled to the side and said "go ahead, it's your first one, you cross before us."
My finish time was 12:21:53 with an average pace of 18:33. Made it with just 9 minutes to spare! I thanked both Dan and Stephen for one of the most memorable experiences of my life and told them that I probably would be wandering the woods still if it wasn't for them. It was truly the toughest challenge I have ever faced, and I didn't think anything could compare to the challenge of an Ironman. It was great to take on this adventure with Parker, Scott, and Tony and can't give enough thanks to Erica for her support and waiting around all day for me to finish! Can't wait to do it again next year!! If anyone wants a challenge that will test everything you have then sign up for Uwharrie next year! It's a beast! 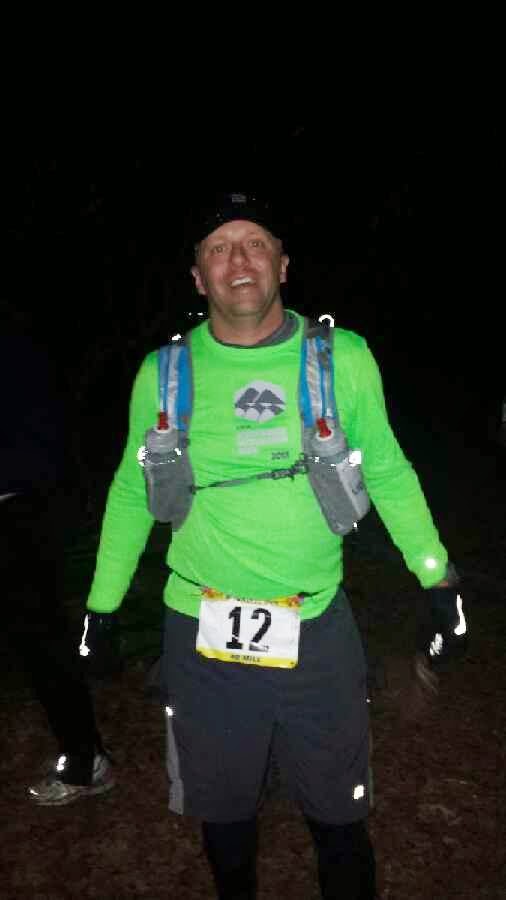